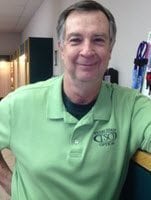 
Dr. Griffin was born and raised in Liberty and attended and graduated from the Liberty school system. He preferred the small town life and moved back to Liberty after college. Had two children Brad and Kari that attended Liberty school. They are married and each have a boy and a girl ages 1 year to 6 years. And you may see them on his new billboard and also on this website.

After state laws were passed in 1991 by the Texas legislature he took a course in Drug Therapeutics and passed a National Board exam to practice this new field of Optometry. Then in 2001 the Glaucoma Specialist act was passed and he took that course. He specializes in Ocular Therapeutics at Liberty TSO but really enjoys treating and seeing children and geriatric patients.

He received an award of acknowledgement for his twenty-one years of service on the Liberty I.S.D. Board of Trustees of which he was very proud to have served on. It was a special time to give back to the school system where his father, uncles, cousins, his brothers, and his children all attended and graduated from Liberty High School.

Dr. Griffin enjoys hunting, fishing, attending and watching sporting events in his time outside of work. He also enjoys his Labrador retriever Buddy and especially his four grandchildren.

One of his interesting patient stories was the lady that told him after her exam and visit that she had always much more preferred her visits to her dentist than her eye doctor! Not that she did not like him, but dental work on her teeth was more pleasant than eye exams. Go figure